Florida Keys (USA) April 2016. An important aspect of successful mosquito control programs is quality control: What mosquito species are actually present, what are their population dynamics, and how are they actually affected by control measures? Answering these questions is the task of mosquito monitoring. This is done with special mosquito traps, often provided worldwide by Biogents (BG), a highly specialised company from Regensburg, Germany. For important disease vector species, Biogents mosquito traps are widely considered the gold standard.

On the Florida Keys – a chain of islands at the southern tip of the Florida peninsula – a novel and advanced Biogents trapping system for monitoring mosquitoes is now being tested. Called the BG-Counter, it is based on a Biogents mosquito trap with carbon dioxide as an attractant. The trap is complemented by a sensor module, which was developed together with the American company onVector. This module counts the captured mosquitoes electronically via a patented infrared light barrier, and discriminates mosquitoes from other insects or foreign particles with an accuracy of around 90 percent. At the same time, it continuously measures additional factors that are also needed for the assessment of future population dynamics and risks: Temperature, wind, relative humidity, and, if necessary, other environmental parameters. The collected data are regularly fed into the Internet. They can be accessed via a web-based interface, which can also be used to control the BG-Counter remotely.

To date, each of the 16 technicians of the Florida Keys Mosquito Control District (FKMCD) spends about two hours per day to monitor the islands’ mosquito populations. This is done at a total of 266 locations. The technicians record the number of mosquitoes that land on them within a minute before they proceed to the next locations to repeat the procedure. The data are collected following a regulation of the Florida Department of Agriculture and Consumer Science on mosquito control. The aim: To apply mosquito control measures as early as possible, in order to prevent or at least to mitigate the development and spread of large mosquito populations. The novel BG-Counter traps simplify the data collection, raising the efficacy and reducing the costs. “The freed resources can then be used in a long term and more focused, specific mosquito management,” says Dr Martin Geier, Managing Director of Biogents AG in Regensburg, Germany.

The solar-powered BG-Counter is the first commercially available mosquito trapping system that allows for a precise monitoring of mosquito population over wide areas, in real-time, directly from the computer, and with minimum manpower. The real-time transmission of mosquito catch data also helps to identify activity patterns and to better understand population dynamics. The BG-Counter will help to better monitor mosquito populations and manage their breeding grounds. Countermeasures can be initiated earlier, more precisely, and therefore more effectively and with less environmental impact. The real-time data acquisition with BG-Counters also allows for a detailed assessment of how effective control measures are. This is especially important in countries were mosquitoes are also transmit diseases.

Supported by the EU’s Horizon 2020 program, the REMOSIS Project (short for Remote Mosquito Situation and Identification System, www.remosis.eu) will now develop the BG-Counter even further. The aim is a sensor module which will be capable of distinguishing different mosquito species. This way mosquito species that are particularly dangerous for humans, such as tiger mosquitoes, can be targeted more precisely and more focused than before. (Tiger mosquitoes like the Asian Tiger Mosquito, Aedes albopictus, or its relative, Aedes aegypti, are vectors of yellow fever, dengue, chikungunya, and Zika virus.) Last, not least, the incorporation into the Internet if Things (IoT) will greatly facilitate the joint analysis of a host of data from traps in different contexts, as well as from other devices. This will make mosquito control and the prevention of mosquito borne diseases more specific, environmentally friendlier, and easier to plan.

Mosquitoes are mainly a nuisance in some countries. However, at the global level, mosquitoes top the list of creatures that are dangerous to humans. As carriers of many pathogens, they kill hundreds of thousands of people every year. 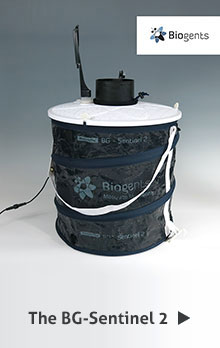